One of the loveliest spots in Broomfield is a place called Josh’s Pond in the Lac Amora neighborhood. Situated at the top of a hill overlooking the Front Range and flanked by a series of trails, the pond is stocked with fish and edged with cattails and the odd tangle of morning glories. In addition to hikers, bikers, and fishermen, the area is frequented by blackbirds, ducks, geese, blue herons, eagles, hawks, prairie dogs, rabbits, coyotes, and other wild critters.

In late September a small crew from the City of Broomfield was out at the pond with a truck. They pulled out a blue spruce that had died because of the drought and replaced it with a piñon pine. The tree was part of a memorial dedicated to the pond’s namesake, a young lad named Josh Cassell. 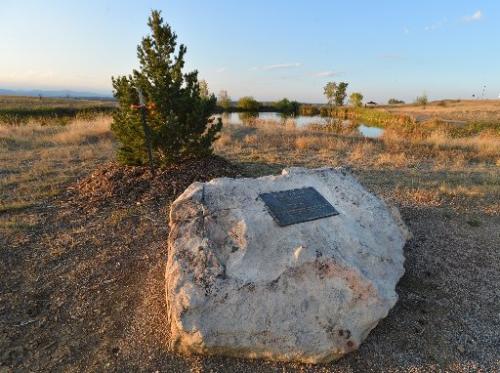 Memorial at Josh’s Pond. Photo by David R. Jennings of the Broomfield Enterprise

With the crew was Josh’s dad, Ron Cassell. Folks from the City had phoned him and let him know about the tree, so he drove down from Fort Collins to take part in this quiet and touching gesture.

Josh Cassell was born in 1981 with a heart defect. At only four months old, he endured heart surgery, then went through another surgery at two years old, during which he was given a new heart valve. As a boy during the 1980s, he lived with his parents in a house overlooking the pond, which at that time was called Lac Amora Pond. Josh and his best friend, Reed Ferrari, spent long happy days at the pond, fishing and chasing frogs.

When Josh was ten years old, something went wrong with his heart again, and the young boy passed away in the hospital. A couple years later, in 1993, a neighbor who had befriended Josh passed a petition around the neighborhood and presented it to the Broomfield City Council. The Council passed the petition and, as a result, the City renamed the pond “Josh’s Pond,” installed the memorial to Josh and planted the blue spruce nearby. A few years later, Josh’s mother also died, and Josh’s dad moved out of town.

Josh Cassell has not been forgotten by those who knew and loved him. Ron Cassell says that, years later, Josh’s friend Reed won a trophy in a state wrestling championship and dedicated it to Josh. Recently, Councilman Mike Shelton noticed that the blue spruce did not make it through last year’s dry winter and notified folks at Broomfield Park Services.

The new tree will need to be nurtured for a few years by way of a water truck, and they hope the more drought resistant piñon pine will fare better than the spruce. In all, the tree, the memorial, and the pond itself are a fitting tribute to a young boy who loved the outdoors.