A century ago, the labor union was much more pervasive in American society than it is today. Not surprisingly, Labor Day was a very popular holiday, celebrated with big events in just about every town in the Front Range.

Denver traditionally hosted a big Labor Day parade. In 1903, the parade featured 7,000 union members, all dressed in uniforms made specifically for the event. The frontier Denver department store, Daniels & Fisher (precursor to May D&F) awarded a banner to the best looking group of marchers, in this case the Painters and Decorators union. Second prize went to the Plasterers’ union. 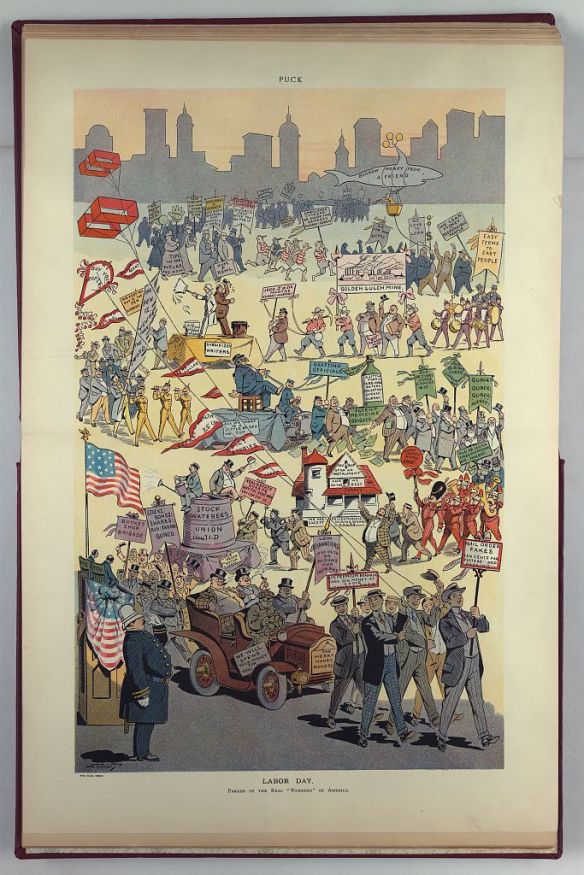 At Lakeside Amusement Park, Labor Day in 1908 saw a “monster barbecue” designed to feed 40,000 hungry visitors in honor of organized labor, hosted by the “White City management” (among whom were the Zang family).

In 1914, the city of Golden paid tribute to the labor union with all sorts of amusing events, including a race just for “fat men,” chasing a greased pig, a burro race, “ball throwing for ladies,” “broncho” and steer riding, plus a dance in the evening at the Armory, featuring “Biddy’s Golden orchestra.” (Golden Transcript, September 3, 1914). These Labor Day events were organized by the Woodmen of America, a fraternal organization whose main purpose was to supply life insurance to its members (the death benefit included those strange tree stump gravestones you see in the old section of cemeteries).

In 1903, the Labor Day parade in Pueblo saw nearly 15,000 union members marching, a parade so long it took an hour to pass a single point. The town of Loveland still hosts its traditional Labor Day corn roast. Colorado Springs 1902 boasted a parade of 2,500 unionists, all wearing “elaborate” uniforms or badges that represented their livelihood, watched by 30,000 spectators. The Painters and Decorators won first prize in this parade as well.

In 1892, Lafayette celebrated Labor Day with a “trotting race,” where the horse pulls the driver around in a two-wheeled cart, called a “sulky.” In a trotting race, the horse must trot in a particular way – usually the right front leg in unison with the left rear, and vice versa.

The town of Louisville, historically a hotbed of mining labor unions, still hosts Labor Day parades that attract more than 25,000 people, although nowadays it’s billed as a “Fall Festival – Labor Day Weekend,” rather than a celebration of organized labor.

1 thought on “A century ago, the labor union was much more pervasive”