A new local history book came out recently, an event that doesn’t happen often. “Coal Creek Canyon, Colorado: Tales from Times Past,” edited by Vicki Moran, tells the story of that lovely canyon that lies west of Highway 93 between Golden and Boulder.

Coal Creek Canyon, or Highway 72, heads into the Front Range off Highway 93 and ends at Highway 119. From Broomfield, it’s a pleasant “back way” to Nederland that avoids Boulder traffic.

“Coal Creek Canyon” begins with shots of probable teepee rings located off Plainview Road near Highway 93. During a recent talk at the Golden History Museum, Vicki explained that the rings were shown to her by a knowledgeable fellow who grew up in the area, George Booth (to whom the book is dedicated). 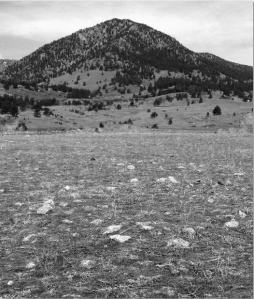 With a modesty that’s typical of writers (hehe), Vicki refers to herself merely as the editor of this impeccably-researched book. A native of Arvada who works in Broomfield, she moved to the canyon ten years ago and immediately started digging into its past. Her book is the impressive result. She has interviewed many locals and gathered a fascinating collection of photographs from the families who settled the canyon.

She writes that earliest roads in Coal Creek Canyon were built in 1866 primarily to supply the hopping mining towns of Gilpin County. The two original wagon roads both charged a toll: the Ramboz Wagon Road and the Coal Creek and Black Hawk Wagon Road. A handsome map illustrates the route of these historic roads. The trip was not an easy one and accidents were common as horses tried to hoist their often cumbersome loads up steep grades or across streams and snowbanks.

The book is packed with family portraits and reminiscences. One favorite character was a man named Henry Kabitsky. From 1913 to 1933, Kabitsky was a caretaker at Miramonte, a small collection of vacation cabins built in 1904. Originally from the region around Bohemia, he’d been “stolen” at the age of 12 and hauled off to Russia to labor in the beet fields. He escaped and returned home but had developed a restless spirit and landed at Ellis Island at age 28. After much wandering, he settled in Coal Creek Canyon because it reminded him of Bohemia. He became something of a sage to the children of the area, waxing philosophical about the trees in his beloved forest: “[H]ere are some tall and beautiful, here some have died, there some are bent and twisted by the wind. So it is with people in the forest of life.”

“Coal Creek Canyon: Tales from Times Past” is available at the Golden History Museum, Amazon.com, local bookstores, from the Coal Creek Canyon Improvement Association, and from most retailers in the canyon.