I recently discovered that a couple members of my Colorado pioneer family worked at the Lithia Water Company in Pueblo. My grandfather’s sister, Jessie Gibson Turner, is listed in the Pueblo city directory in 1938 as working at Lithia Water Co.

Jessie’s step-father, Henry McGlothlen, was a water freighter in Victor, Colorado in the 1890s. After he married Agnes, Jessie’s mother, the family moved to Pueblo. In the early part of the new century, Henry’s occupation is listed as “mineral water.” Later, in 1930, Henry also worked at the Lithia Water Co. The “Colorado Lithia Water Co.” incorporation records show the address as 99 W. Adams Avenue in Pueblo, which was their address. I haven’t figured out if and how this is the same company as the “Lithia Water Co.” The Colorado Archives have the incorporation and trademark records for the Lithia Water Bottling Co. These show that company was established by three other men — not Henry McGlothlen.

Lithia Water was known to have healing elements and was commonly marketed during those days as medicinal mineral water. The critical element is lithium salts, which supposedly improved the mood of those imbibing. It shares some elements with the anti-depressant lithium. Some studies show great results with lithia water; others not so great. Even a century ago when lithia water was popular, some newspaper articles debunked its effects.

By a strange coincidence, I was telling my friend Charmaine Ortega-Getz (author of “Weird Colorado”) about the Lithia Water Co. of Pueblo and the connection with my relatives. It just so happened that Charmaine actually possessed two bottles from that company. She rushed to her basement and pulled them from boxes and presented them to me as gifts. The bottles resemble early Coke bottles; one is clear and the other is green-tinted. They both say the same thing: “This bottle never sold. Lithia (in logotype), Pueblo, Colo. 6 1/2 ounces.” (I’d love to know why a bottle would be embossed with the words, “This bottle never sold.” Seems a bit odd!) 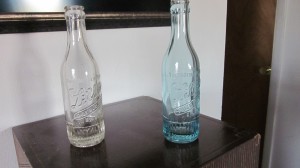