Still targeted today for extermination by ranchers, real estate developers and city councils, the prairie dog has not fared well in the settlement of the west. According to the Sierra Club, prairie dogs once numbered up to 5 billion. Today, they inhabit only 1 percent of their former range and are candidates for inclusion on the Endangered Species Act.

The little creature first entered the pages of western literature in 1804 in the journals of  William Clark of the Lewis and Clark Expedition:

Friday, September 7, 1804
“Discovered a Village of Small animals that burrow in the grown (those animals are Called by the french Petite Chien) Killed one and Caught one a live by poreing a great quantity of Water in his hole we attempted to dig to the beds of one of those animals, after digging 6 feet [1.8 meters], found by running a pole down that we were not half way to his Lodge…(Source: http://www.nationalgeographic.com/lewisandclark/record_species_075_3_1.html)

The expedition collected numerous specimens on their journey. Included in the curious collection delivered to President Thomas Jefferson was a prairie dog that somehow survived the four month journey east.

In the following decades, the prairie dog became something of a tourist attraction for those traveling west.  As late as 1899, a black poet and writer named Paul Laurence Dunbar traveled to Colorado, seeking a cure, like many, for his tuberculosis:

“Dunbar had been most impressed en route to Denver not by the mountain vistas, he conceded, but by the prairie dog colonies on the plains of eastern Colorado: ‘None of us had ever before been past the Mississippi, and we had always heard of the prairie dog towns and we wanted to see one. Well, we looked patiently all day Wednesday and saw none, but this morning, this grand and beautiful morning, at the first hint of the sunshine over the far, broad stretches of the plain, we sighted a whole regiment of them standing as if in welcome of us…’” (Source: “Denver Took Me Into Her Arms” by Gary Scharnhorst and Kadeshia Matthews, Colorado Heritage, July/August 2011).

Sadly, the curiosity factor was not enough to save the “Little Dog.” Ranchers consider them pests whose burrows are a threat to horses and other livestock and the colonies often stand in the way of spreading suburbs.

Today, a smattering of colonies still exists in the front range region. Until a couple of years ago, a large colony thrived at the Westminster Dog Park on Simms Blvd. The prairie dogs there also provided food for a host of other wild creatures, including coyotes and birds of prey.  In July of 2009, plague-invested fleas caused an abrupt die-off at the dog park. A die-off is indicated when the chirping creatures disappear from the scene, as they tend to head deep into their burrows to die.  Since then, other die-offs have occurred in the area.

The prairie dog still has not been given Endangered Species status, but there’s a good chance they will, sooner or later, end up on that list. 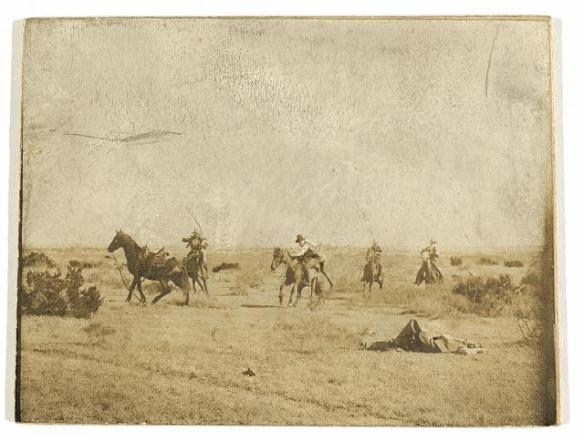 Amon Carter caption: A Turkey Track cowboy is hurt when his mount steps in a prairie dog hole and throws him, Turkey Track Ranch, Texas, 1906. Library of Congress.