This article first appeared in the Broomfield Enterprise (May 20, 2007).

Back in 1849, a wagon train came through the front range of Colorado, which was then described as a “howling wilderness,” sparsely populated by the Arapaho and Cheyenne.  In a collaboration that must have been unusual, the wagon train consisted of members of the Cherokee Nation  and white pioneers. All were heading ultimately for the gold fields of California. The trail they took along the Colorado Front Range became known as the Cherokee Trail (not to be confused with the infamous Cherokee Trail of Tears.)

Starting at Bent’s Fort in southeastern Colorado (near today’s La Junta) , the Cherokee Trail headed west to Pueblo, north into Laramie, Wyoming, and west again to rendezvous with the Oregon Trail at Fort Bridger on the Green River. At that time, the area that would become Denver was an Arapaho camp of up to 1,500 people.

In 1850, as many as four more wagon trains of Cherokees and whites entered the area using the same trail.  Just north of Denver, some of these groups took a more westerly route, rejoining the original trail near Fort Collins. At what is now Broomfield, this western branch of the Cherokee Trail followed roughly the same route as today’s Highway 287.

Over the next few years, traffic on the Cherokee Trail consisted mostly of prospectors on their way to California. That changed in 1858 when William Russell discovered gold in Colorado. The discovery started what is collectively known as the Pikes Peak Gold Rush, which brought 100,000 people to Colorado in a space of three years. A chunk of those prospectors came to the area north of Denver. A member of one of the 1850 wagon trains, Lewis Ralston, had found a bit of gold on a small tributary of today’s Clear Creek. (The tributary is now called Ralston Creek.) Several of the Cherokees from that original 1850 party returned from California and found a generous placer deposit on the South Platte.

Someone needed to feed all those hungry prospectors and food prices were high so there was good money to be made. Farmers and ranchers moved in, raising potatoes, corn, pumpkins, squash, and wheat, along with cattle and horses.

But, as things seemed to go in the West, the Cherokee Trail’s heyday was short-lived. Within 20 years, the railroads took over from the stagecoach and the only people trundling along the Cherokee Trail were those who had settled in to stay. 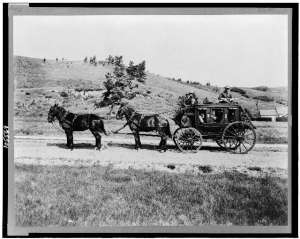 2 thoughts on “Cherokee Trail was early road through Colorado”