This article first appeared in slightly altered form in the Broomfield Enterprise (12/16/07).

For a brief period in the wilds that became Colorado, the stage coach was king. During the 1860s, the Rocky Mountain News advertised Overland Stage coaches leaving Denver every morning at 8 a.m. for a five day trip to Salt Lake and on to California. The biggest stage line, the Overland was run by the famed Ben Holladay and followed the Cherokee Trail, also known as the Overland Trail. Stages also ran daily between Denver and Nebraska and Kansas. 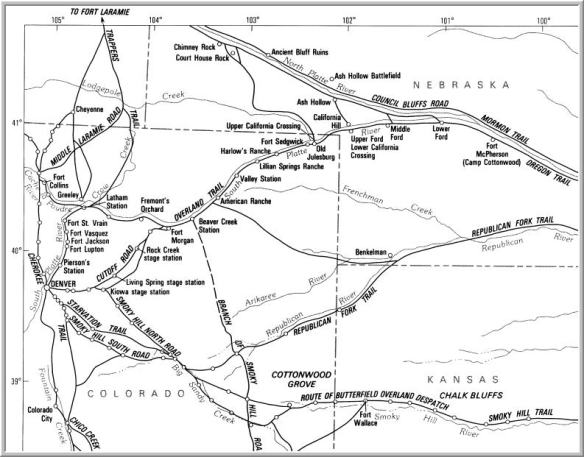 As opposed to the plodding wagon trains, the stage coach could cover 125 miles a day, pausing at “swing” stations to swap out horse teams – in early NASCAR style. Fifty or so miles apart were the “home stations,” where passengers could stagger off for a quick meal and to get their bones re-organized after what must have been a madcap jolting journey. Many home stations also served as inns and as social centers for the locals.

The vehicle of choice was the famous Concord coach, a large, sturdy rig usually pulled by six horses. The Concord could hold 22 passengers (16 inside, four on top, and two with the driver). The coaches also carried freight such as mail, dry goods and food, gold dust, the ubiquitous strong box, and “public documents from Washington” (“Pub. Docs”).

One of Holladay’s employees, Frank A. Root, wrote a book about his experiences as a “messenger” on the Overland route. A messenger took charge of express packages and the strong box. Root describes the stage frequently getting stuck in sand and, on occasion, drivers using “sack after sack of the ‘Pub Docs.’” to help get the rig out of mud.

The newspapers of the day described Indian attacks on the coaches and stations, usually for the purpose of stealing stock and looting. One man, identified as W.J.S., reported that his party had “met but one band of Indians—they were twelve ‘friendly Cheyennes,’ armed to the teeth, and had taken possession of a station just before coach drove up. They either ordered or helped themselves to every thing they wanted…” W.J.S goes on to describe an even more memorable event: “I know of nothing more exciting than to see a herd of, say 500 or 1,000 (buffalo), bearing down … for the coach, to strike them as they cross the road.” (Rocky Mountain News, September 20, 1866).

All was not white knuckles, banditry, and throwing Washington bureaucracy into the mud, however. Root writes of stopping along the route to pick up locals and carry them to a dance at the station: “Most of the ladies on the overland route appeared to take great delight in dancing, as it was about their only social enjoyment. They were only too eager and willing to ride the long distance by stage for the opportunity to have a friendly visit with their lady friends and neighbors and, at the same time, spend the night in ‘tripping the light, fantastic toe.’” (Frank A. Root, “The Overland Stage to California: Personal Reminiscences and Authentic History of the Great Overland Stage Line and Pony Express,” 1901).
________________________________________________________
The copyright of the article “Age of stagecoach was full of adventure” is owned by Carol Turner. Permission to republish this article in print or online must be granted by the author in writing. Article may be quoted if properly cited.